I have just completed a visualization for a proposed retail space modification for Rose City Textiles in Portland. Working with Rose City Textiles, I presented the space after combining their retail and warehouse spaces. This style of shopping seeks to improve the clients access to materials and provide a streamlined shopping experience.

Posted on September 24, 2013 by Rainport Visuals

I have recently started doing a series of pin up inspired art. I’ve taken some classic pin up poses and reduced them to their basic lines and forms. I hope that I’ve imbued a sense of whimsy and fun, while maintaining a sense of beauty.

Prints are available if you are interested. Most any size print can be accommodated, from small to wall covering impact art. Check my portfolio for all available styles!

Augmented Reality and You

Posted on September 20, 2013 by Rainport Visuals

I’m always looking for new ideas and new ways to interact with people. I have just recently begun working with Augmented Reality and its ability to take people further into a piece of art, a story or a website.

Imagine a comic book panel that comes to life with animation, a piece of art that leads the viewer deeper into the artists vision, a book that pulls you further into its pages or a physical wedding photograph that leads to a video of the bride and groom’s first dance. The possibilities are real and as varied as your imagination.

I would really like to talk with any comic book artists, web designers, traditional and digital artists, writers, photographers and other graphic designers about adding Augmented Reality to their work and creating a deeper experience within your work and for your clients.

If this sounds like something that interests you, please send me an e-mail at rainportvisuals@gmail.com.

Hangin’ With My Gnomies

Posted on September 19, 2013 by Rainport Visuals

I was recently hired to do a T-Shirt design for the Garden Street United Methodist Church college group. I was asked to run with the idea of “Hangin’ With My Gnomies.” I used the idea of the biker patch to frame the design, while drawing the garden gnome to have a more hand drawn feel, with a slightly hipster aesthetic.

I recently completed a design and animation for a leadership class team at a national insurance company. The team was tasked with identifying an area of their building they wanted to change and craft those changes. The team wished to change three training rooms and a break area into a childcare area. I opened wall space with numerous large windows and added additional walls to secure the area. The large training room became an ideal space for an indoor play area.

My final project for my animation class this term was to create a 30 second walk cycle for a character.

My initial thought for this project was to do an octopus. Knowing I had other projects on my plate this semester, including a full dome animation for a planetarium, my animation instructor at Washington State University-Vancouver, Brenda Grell, told me to simplify. I couldn’t think of anything simpler than a sphere, so I gave a sphere arms, legs and eyes. I chose to use as simple as shapes as possible to reduce my work load. The most complex modelling was the hands and feet, though they are really just a set of boxes.

The modelling, rigging, animation, and rendering were all done in Maya 2013. I used Maya’s physical sun and sky setting to create very nice shadows and lighting. A word to the wise, if you use the sun and sky shader, turn down the Gamma settings on the lens shader to 1.00 after you add the sun. This will prevent your scene from becoming washed out. After rendering my scene as a series of .IFF images, I took them into After Effects and rendered them down into the final movie. Sound effects and music came from soundcloud.com and freesound.org. The music track was put together in Audacity.

Although 30 seconds isn’t a very long time, I thought that I had the opportunity to tell a story while showing the character’s walk cycle. I decided my little character was a visitor from another planet. I had a UFO model sitting around, so I added it in the background and used Maya’s sculpt mode to create the crash site. The ground is a simple dirt texture, made tileable in GIMP, and repeated. The same image, desaturated, serves as the bump map. The second character is exactly the same as the first, including animations, with a different color on him. I liked the idea of a conflict centering around being upstaged.

I hope you enjoy “Greetings.”

To Catch A King

My latest class project was to animate a conflict between two or more chess pieces. I chose a theme of classic adventure movies. Keeping with chess conventions, the Queen is the strongest piece on the board and is doing all she can to protect the King.

All the modeling and rendering was done in Maya, audio was done in Audacity and everything was put together in Windows Movie Maker. The animation is all keyframed and no piece are parented to any other.

I hope you enjoy it as much as I enjoyed creating it.

The need to create

Posted on February 5, 2013 by Rainport Visuals

Sometimes the need to create is simply overwhelming. During this process of learning two new programs, Maya and SketchUp, I have often felt frustrated and stymied by my inability to create images the way I’m used to. This weekend I was flipping through a design magazine and was inspired by a photo of a bathroom, actually an ad for bathroom fixtures. I jumped in to Blender and set to work on a similar image. Occasionally you just need to put pen to paper, or mouse to desk, and create something.

The rendering is done in Cycles. Posted on February 1, 2013 by Rainport Visuals

Over the last two weeks, I’ve had an assignment to model a piece of architecture that is important to me in some way. I chose to model Frank Lloyd Wright’s Fallingwater. Not only is this a great example of FLW’s design sense, it is one of the first homes that got me interested in architecture. This was a hugely rewarding project for me. I had only basic knowledge of SketchUp prior to this and knew that this project would be an immense challenge. The house you see here was actually my fourth time through the entire project. Once I discovered how to use groups the modeling became much easier. I think the main flaw with SketchUp is that any intersection in a line splits those two line. In other words, two crossed lines become for joined lines. The use of groups eliminates much of the frustration inherent with that issue. The materials are all stock SketchUp materials and the render is a simple export to jpeg.

My project was greatly assisted by the Western Pennsylvania Conservancy, which maintains scale drawings of Fallingwater for use by students and educators. Their pictures and walk throughs were a great help as well.

Modeling a Chair in Maya

After getting an Associate’s Degree from Walla Walla Community College in Civil Engineering Technology and working for the US Army Corps of Engineers for 3 1/2 years, I have gone back to school to finish my Bachelor’s Degree. I am a student in the Digital Technology and Culture program at Washington State University-Vancouver. One of our first projects in one of my digital animation course was modeling a chair. Easy, right? Well, yes, if you get to use the software you’re proficient with. I am an avid Blender user, but have to learn Maya for my classes. This was an exercise in frustration as the learning curve on 3d software is so high. I am starting to get my feet underneath me, but it has been a struggle at times.

All the modeling was done in Maya, though the actual render was done in Cycles, which is Blender’s rendering engine. The chair is influenced by Michael Steffenhagen’s Reo lounge chair. While his is a very modern design in rattan and cloth, I have used carbon fiber and leather as my materials of choice. 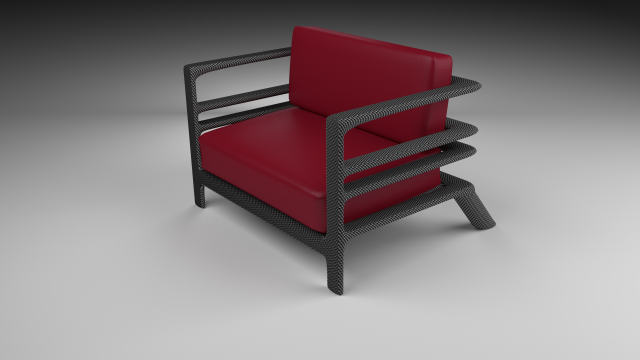